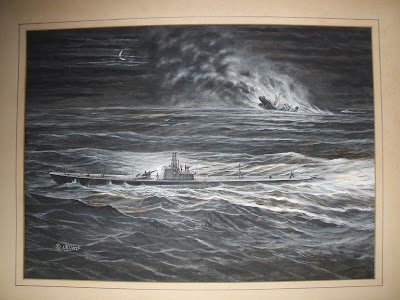 I see that has been just a bit more than a year since I produced any words for this little blog. No excuses. But since I'm here this would be a good time to bring up a new mystery I'm trying to solve.

I recently acquired two original paintings of World War II submarines. They were produced by a man named I. R. "Ike" Lloyd who was in the design department at Mare Island Shipyard during the war.
I thought it would be interesting learn more about Mr. Lloyd. After quite a bit of internet searching and talking and corresponding with museum curators in California and Washington DC, I am learning only bits and pieces.
Even more extraordinary: I have been unable to locate any other of Mr. Lloyd's original paintings. Prints of various ship paintings created by Mr. Lloyd show up occasionally on internet auction sites.
But no original paintings.
Here is what I know: Mr. Lloyd worked in the design department at Mare Island and resided in Vallejo for about 10 years. Sometime after WWII, he was divorced and moved to Key West, Fla, where he passed away in 1956. While at Mare Island he created numerous paintings in oil, guache and tempura of various ships, mostly submarines. And he drew ships for caches, shellback documents (a certificate attesting to a sailor having crossed the equator the first time) and at least in one instance, an invitation to a ship christening. And, for a time, he operated "Lloyds of Vallejo" on Hichborn Street where he created ship mementos.
The list of submarines he painted is a long one. To mention a few, Gato, Permit, Sailfish, Archerfish, Trigger, Wahoo, Argonaut, and Pompano. The first Lloyd item that shows up on Google is his painting of the USS Bailey in a firefight at the Battle of Komandorski Island. Prints of this battle, many autographed by sailors, show up once in a while.
In 1944, Lloyd also had a couple of his submarine paintings shown at the City of Paris department store in San Francisco. A brief article in the San Francisco Chronicle said: "Mr. Lloyd . . . received permission from Washington at the outbreak of the war to make a series of Navy paintings which are being kept on record in Washington." The second part of that sentence brought me into contact with the curator of the Naval Art Museum in Washington DC. Lloyd's name does not show up in their inventory of naval art.
So, Mr. Reader, I have two major questions:
- What happened to Mr.Lloyd after his move from Vallejo and why did he quit painting?
- Where are his original paintings?

If you have any clues, you know where to reach me. I'll be right here.

I first time visit in this blog. I find this blog have relevant information.

I have a print by I. R. Lloyd of my father's ship the USS Stanly, DD478. This print depicts a combat incident that took place April 12, 1945 during picket duty off Okinawwa. One Baka bomb and two Zekes hit the Stanly but not a man was lost. The painting depicts the crashing of the first Zero after the Baka bomb hit.

Hi -- thanks for checking out my blog. Is it possible to send a photo of your print? I don't believe you can add it to this blog, but you can send it to me directly at mgmattis@comcast.net. You can see more of his work on the naval library website. thanks again, Mike

Hello,
I happened to notice your blog because I was interested in who
I. R. Lloyd is ---

I had just looked at one of the framed pictures of my father's and it is of the Gato, I had seen it for many years but never bothered to look at what it had written on it, as it was just a dark picture of a couple of boats. My father was on the Gato in WWII He was also at Mare Island and we lived in Key West when he retired from the Navy. 20 years in along with Reserve. The painting looks like yours except his shows orange flames from the smoke and bombs.
My Name is Cynthia Greenleaf - My Father was Robert Lee Greenleaf

We have a print by I.R. Loyd of the U.S.S. Devilfish being attacked by a Kamikaze (the only known air attack on our Submarines). My father-in-law was on the USS Devilfish when this occurred. You have provided more information on your site than what I have been able to find in the past about this artist. Thank you.

He was my grandfather. His original paintings and remaining prints, except for a few to be held by the family, will be donated to the Washington DC Naval Museum in 2014.

We recently purchased an antique house in Killingworth, CT. In the house were two Lloyd prints of the USS Bluegill. Upon researching the sub, I found that the grandfather of the seller was a crew member. The prints also included the IR Lloyd label on the reverse of the frames. To see more about the house, check out our blog: djgschueler.blogspot.com.
Thanx. DG Schueler

That's good to hear Kristina, I hope they can find a place to display them. If nothing else they will be in good hands. I found this post searching for IR Lloyd as well, as I found this postcard on ebay

Thank you Kristina. As a member of America's WWII War Orphan's Network I am in touch with other children of sailor's who were lost at sea. I think that your grand father's art of ships their parent's were serving on will mean a lot to each one of them. I happen to have two prints of one of my father's submarines, the U.S.S. Nautilus and the prints have meant a lot to me over the years. To be able to see an original of the U.S.S. Tullibee, the sub that he and all but one of it's crew went down with, if it is in the museum would be wonderful. You see I never met my father. Both of my prints came from Lloyds of Vallejo Art Studio, 615 Hichborn St., Vallejo, California. One of the prints is a Deep Submergence Cruisograph that acknowledges that my father was aboard when the Nautilus dove to a depth of 350 feet. Your grandfather was a wonderful artist and his work has ment a lot to our family and I am sure many others who have been touched by WWII. Thank you and your family for sharing his fine work.

I have a few prints that I acquired via auction. Maybe 3-4. Ships and submarines. Email: d.beeson@yahoo.com

Just found a print of the USS Howard W Gilmore, a submarine tender, which revealed the original purchasers name ( a Gilmore sailor) and a handwritten note to his wife. Happy to attach some photos if emailed to my user name.

I just found a paint colored photo of the USS gato. The painting is by I R Lloyd of Vallejo California. Not sure what to do with it. Or if it's worth anything.

I have a print of the USS Thresher in battle...says on this ship Chas H Fry served....Not sure who it is but it belonged to my wife's grandfather who served in the USN in pacific but not on this ship....wondering if it is worth anything...